Additonal feedstocks from agricultural origin (Categories 2-4) could contribute with roughly 470,000 tonnes dry matter per year, or 1.25 times the amount of biomass as the existing agricultural residues such as straw and sugarbeet tops. 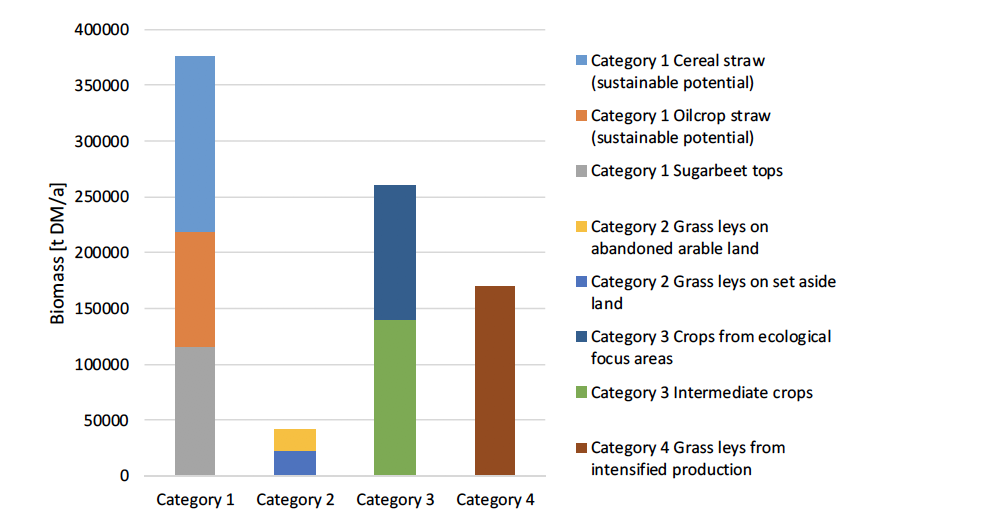 Protein content of these addional feedstocks is over 50,000 tonnes dry matter per year, or about 1.3 times the amount of biomass as the existing agricultural residues. 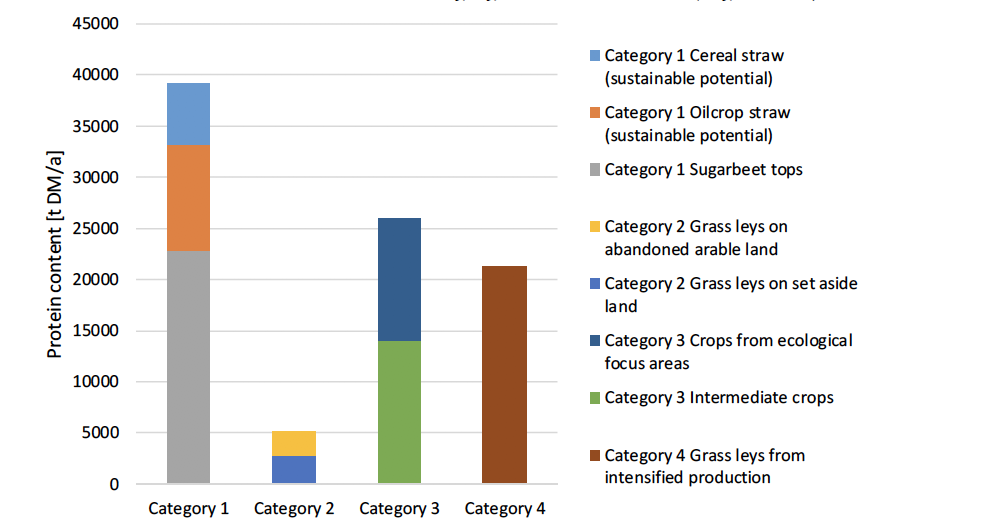 Shifting protein production from animal to plant proteins is regarded as a more sustainable way of nutrient supply in terms of food and feed, but their production should be based on inedible biomass by humans (e.g. grassland for feeding ruminants). Existing agricultural residues and additionally grown sustainable feedstocks represent a large feedstock base of approx. 850,000 tonnes dry matter per year, and a protein content of approx. 90,000 tonnes dry matter per year in Skåne alone. Similar approaches can be taken in the other SBA regions and could therefore form a new basis of income to agricultural businesses.

A large variety of plant species of intermediate crops can be grown with different biomass yields, different plant development rates and different content of proteins and other valuable compounds. This, however, also presents an opportunity to adjust the cropping systems to fit the needs of the utilisation processes on hand.

For ley crops and straw, technology for collection and distribution of the feedstocks is mature and widely available, which could support large-scale implementation. For straw, policy development has been shown to be an effective measure to implement large-scale utilisation in Denmark.

Calcuculating the protein feedstock gives only a rudimentary picture of what is possible to implement. Extractability of crude and functional proteins has been shown to vary considerably and needs to be investigated for each feedstock.

Plant proteins still face many bottlenecks in terms of availability of technology, e.g. solubility, foaming and emulsifying properties, and in the nutritional and sensory quality of the finished product (e.g. “green” taste). Lipoxygenases or saponins are pointed out as the generators of “off- flavors”. Genetics and formulations, possibly combinations of these, have been highlighted as measures for improvement. Consumer behavior and acceptability remains the final bottleneck for developing new protein sources.

Similar to residues from the value chains discussed above, the variability of the biomass composition and quality may impose critical process limitations, but quality standards for the feedstock are missing and need to be defined and implemented. Standardisation of feedstocks will enable process and product standardisation and allow to reduce processing costs.

Cost for collection and supply of existing residues such as sugar beet tops and sustainably grown intermediate crops may turn out to be high, both in reference to the high water content of the feedstock and the low concentration in the landscape. On the other hand, intermediate crops have been shown to have many positive effects such as weed competition, contribution to soil organic carbon as well as nitrogen fixation or accumulation, which – if accounted for – could pay for part of the extablishing costs.